Half a year ago I worked backstage at Monique Collignon. I was really excited to be working with such a famous fashion designer as she is! (But of course also a bit scared, I didn’t want to do something wrong). When I saw the workplace I was really surprided, It was even better than I thought it would be. On the wall hung drawings of clothes and also pictures of models with the clothes they were going to wear. People were working at beautiful dresses. And there also were manequins with haute couture on it. Everything was so beautiful! I could stare at those dresses for ages! So many details and well finished.

I did little things like looking for the right shoes for the models. Also I could help with the sweep of the dresses and with putting the haute couture in the right order for the big show that was comming up. This show would be her come-back. (And it really was I could tell you!). 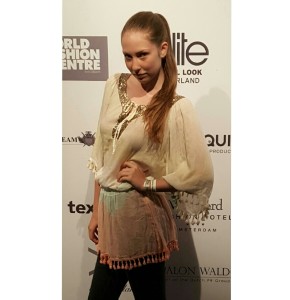 During this show I also helped back-stage and it was awesome! There were a lot of make-up stends where the models were supposed to sit still for a very long time so that they would look ever more beautiful than before. Than the models had to practise the show. I was sitting where the audience normaly sits and I had a look at how they dit the rehearsal. (They did geat!). There also was a man who told the models how to act and what to do, like; turn around here and stand still here, do this pose, walk faster/slower, etc. After we had all eten, the real show began. Alle the models were already standing in a que in the right order for the show. Everyone was so tense and the atmosphere went from exited to nervous, when the people of the audiance took their places. But when we heard the music start (tiesto!!) everyone was too buzy to be nervous at all. Everyone was doing something. Some peolple helped the models to change clothes very quickly, others gave a finishing touch to the hair or the make up. I was only trying to not get in the way, for I was really afraid to ruin the whole show by doing something really stupid. There also was a creen casting what was happening front-stage, so we could have a look. At the end Monique came with the models to the front of the stage and everyone clapped loudly for them. The enthousiasm, the beautiful creations and the music that made it even better! It was all so powerful and amazing!

After the show there were people intervieuwing Monique and a afterparty. It was one of the best experiences I’ve ever had and I am really happy that I could be a little part of it! I’ll never forget it! So, a big shoudout to brilliant fashion designer MONIQUE COLLIGNON! Thanks a lot for the great times!